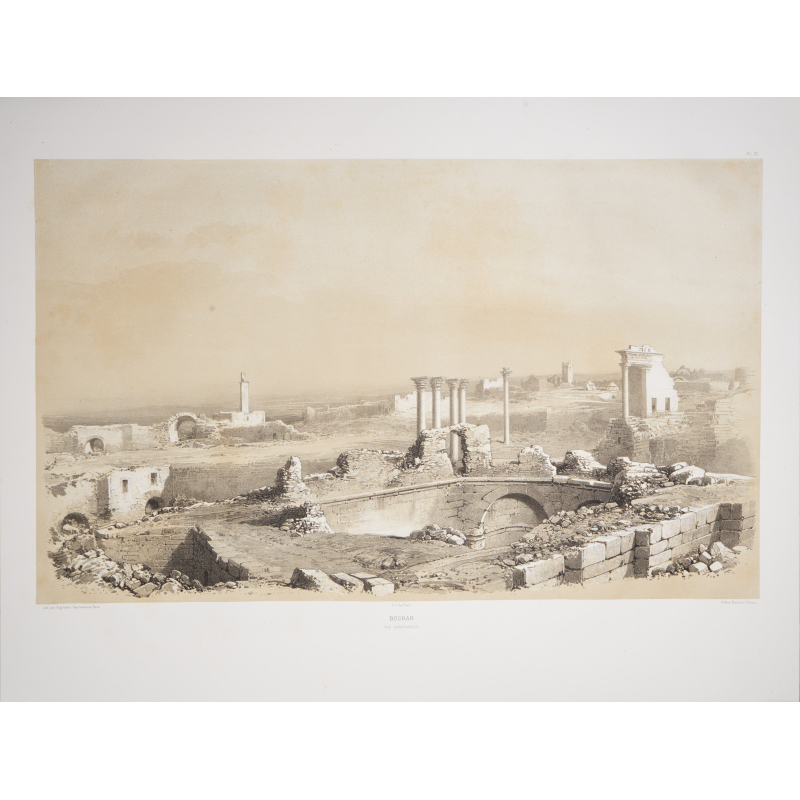 First edition consisting of a volume of text and an atlas plano, the whole decorated with 28 unpublished plates (of which 27 for the atlas).
Leaving Beirut in October 1857, the author travels to Damascus, then to the Haouran, to Jerusalem and to the Dead Sea. The author accompanies the chronological account of his journey with an atlas representing numerous photographic views reproduced in lithography by Ciceri, maps, topographical plans, pieces of architecture, epigraphy and some ancient monuments.


Copy uncut, small tear in the lower margin of the cover of the atlas.

Alban Emmanuel Guillaume-Rey (1837-1916) was a French archaeologist, topographer and orientalist.

After his studies, Guillaume-Rey decided to make his first trip to Syria. At the age of twenty, he made important academic publications and decided to explore the Haouran region in Syria, hoping to gain some academic glory. He was introduced to topography by Alexis Noël during this trip.

On his return from Syria in 1859, Rey helped to create an Arabic-French dictionary in collaboration with the Oeuvre d'Orient foundation. In December 1865, he received the title of Knight of the Order of Saint Gregory, conferred by the Vatican; in 1866, he was finally awarded the title of Knight of the Legion of Honour and Foreign Orders as a publicist in charge of missions in the Orient.