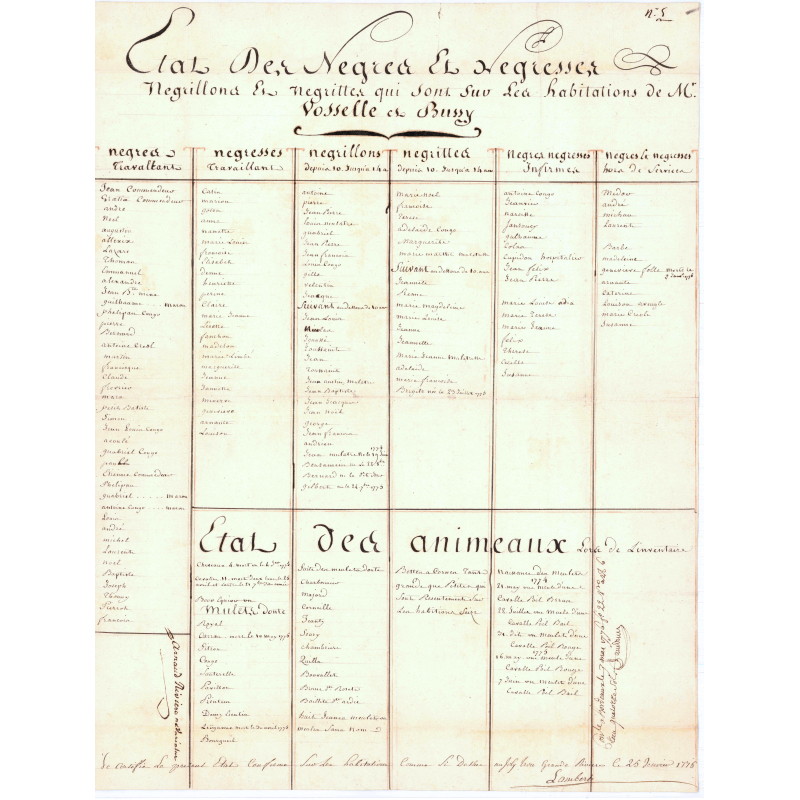 Interesting document signed by Lambert, manager of the Vosselle and Bussy habitations in Saint-Domingue, and "certified true" on 25 January 1776, at the Joly Trou, then double countersigned by "Arnaud Rivière né Varietur" and "Jambrun (?), Bordeaux, 7 May 1776". Intended for the plantation owners, it gives a precise list of the slaves present on the island at the very beginning of 1776, with their first names and classified by category, i.e. 41 men (3 of whom are "maroons", i.e. fugitives) and 24 women, 44 children and 28 "infirm" or "out of service". The document also contains a precise inventory of the animals (mules, horned animals and horses).

The identity of these Vosselle and Bussy remains a mystery, as their names appear in the census taken by Oliver Gliech as "colonists in Saint-Domingue without landed property", but with very little information about them (respectively n° 18192 and 3057 of the census). However, it appears from this document that they were owners of at least one plantation, a large one given the number of slaves. Moreover, the lifting of the sequestration order pronounced on 17 Frimaire year XI (8 December 1802) by the Captain General in the colony of Saint-Domingue mentions the restitution to a lady "Rivière, femme Bittard Lacombe, represented by Étienne Brun, [of] half of the Vosselle and Bussy houses, located in Grande-Rivière".